'Do Not Believe Too Quickly': A Room Made Of Leaves By Kate Grenville 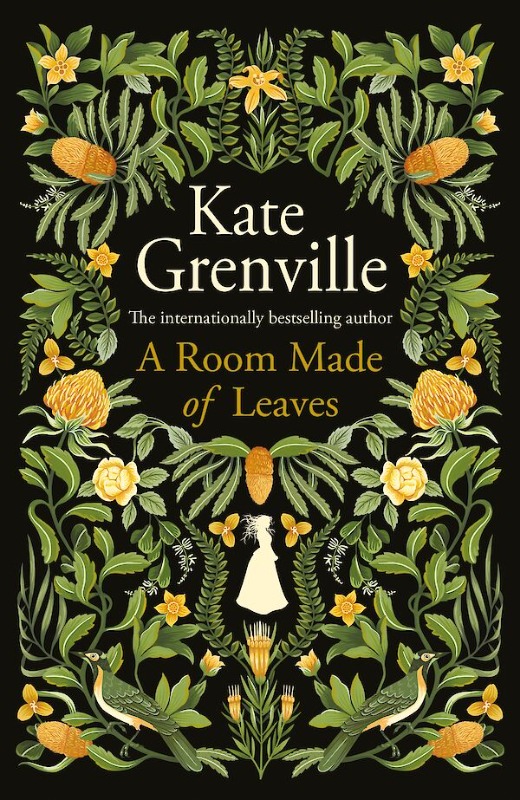 False narratives seek to re-cast mendacious distortions of the truth as unequivocal statements of objective fact. For as long as humankind has been telling stories, an inveterate desire to invent has inevitably conferred upon any narrative the capacity to either perfidiously distil self-serving, specious interpretations of historical fact, or convey unalloyed truths. The modern parlance for the intentional misreporting of events or their causes is casually coined ‘fake news’. Who and what to believe are dilemmas with pronounced historical concomitants and ongoing contemporaneous currency.

Kate Grenville’s recently published novel, A Room Made of Leaves, is a gloriously engaging and sophisticated attempt to explore Australia’s origins, not through the pervicacious pro-colonial eyes of Captain Collins (1756 -1810), but through the sensitively rendered consciousness of the wife of one of Australia’s founding fathers, Mrs Elizabeth Macarthur (1766-1850).

Grenville is an author with real provenance. Her magnum opus, The Secret River was nominated for the Booker Prize and the Miles Franklin literary Award, also garnering the Commonwealth Writer’s Prize. As an internationally renowned bestselling novelist, her oeuvre often explores strong female characters in difficult cultural settings with an Antipodean focus. She seems to enjoy putting the cat amongst the pigeons and with typical Australian verve, passionately spices her love of country with iconoclasm, philosophical insight and a dry line in subtle humour. A Room Made of Leaves is her return to the novel form after a ten year hiatus. Twenty years in the making, it is well worth the wait.

Grenville dextrously exploits the genre of historical fiction to both engage and disturb with the meticulous care of an historian and the compassion of an intellectually astute social philosopher. Accomplished, entertaining and profoundly unsettling, her novel is an unflinching attempt to portray the evils of colonialism, whilst also giving us an evocative rendering of Australia’s harsh beauty as the backdrop to the jarring collision between two antithetical cultures.

We are given a first person depiction of ethnocentricity, cupidity and injustice, all articulated via the iconoclastic imagination and pen of an author very much at the top of her storytelling game. For me, this is a novel that should be considered essential reading for anyone seeking to understand the power of false narratives and the redemptive quality of honest re-appraisal. At the very least, it’s a compelling argument to share in its protagonist’s call…’Do not believe too quickly’.

Set in 1778, twenty-one year old Elizabeth Veale, the ‘wilful’ but oppressed ward of a Devon clergyman has few prospects. Enter John Macarthur, a lowly ensign with an unflattering past, crippling personal debts and a character as healthy as a rotten tree branch. Injudicious marriage to Macarthur compels Elizabeth to accompany her vainglorious husband to New South Wales, where he takes up the post of Lieutenant in Sydney’s nascent penal colony. ‘Macarthur was a man on the make. Ambition propelled everything he did’, so Elizabeth tells us. The novel purports to be the edited letters of Elizabeth and her private account of her life as Macarthur’s wife. Given that Macarthur rapaciously ascended the greasy pole of colonial cronyism to become the wealthiest man in NSW ten years after his arrival in Australia, her account presents us with an unexpurgated record of what transpired from her fictitious, delicately rendered perspective.

Elizabeth was the first officer’s wife to settle in Australia, surrounded by transported, desperately malnourished convicts and the moral poverty of Sydney as it emerged amidst naked ambition, political jostling and the ruthless pursuit of colonial greed. The reader is treated to a fly on the wall view of the birth of Australia, albeit one conjured by an author with an agenda to provide an alternative narrative to that which has established Macarthur as a national hero in Australia, and the benefactor responsible for the success of it sheep farming industry.

The plot advances with assured, page-turning pace by dint of a series of previously unpublished intimate vignettes, each a journal account written by Elizabeth. These notes are assiduously crafted monologues; psychological insight and poignant introspection only eclipsed by touching verisimilitude. Our author claims to have discovered these revelatory historical documents by chance, hidden in a small box in the attic of an old Sydney dwelling. They describe Elizabeth’s encounter with newly born Australia and her own fledgling steps towards personal authenticity.

The reader is addressed directly by Elizabeth as she records both her own personal struggles and growth and the ravages inflicted upon those who oppose her husband’s venal, self-aggrandising schemes.Grenville’s potency lies in her ability to suspend our disbelief; to immerse us in Elizabeth’s mind, emotional hinterland and burgeoning sense of self.

The literary tools deployed by Grenville to bring her story to radiant life are wielded with legerdemain. Structurally the novel is faultless, a meticulously crafted journey from exodus to homecoming. Grenville’s descriptive prose is a joy to read. Elizabeth describes the view from her petit coin a moi:

‘As I sat, the river caught the last light. Its surface alive with flickering patterns of gold and shining spots where bubbles rose. On the far bank the tangled black trunks of the mangroves stood up to their manly knees in water. There was the lap of small waves, the gentle whistling music of the she-oaks when a breeze ran through them, the twittering’s and chirpings as invisible birds arranged themselves for the night’.

These descriptive passages cause Australia itself to become a character in the novel, exercising its majesty over the psyche of the reader. 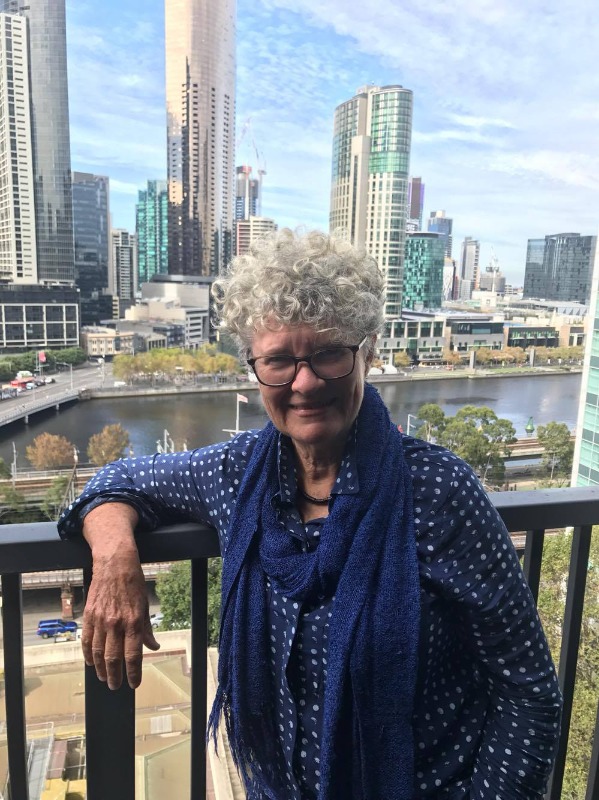 Kate Grenville
Thematically, we are confronted with self-actualisation, personal liberty and its loss. Woven seamlessly into these motifs, we find ourselves wrestling with socio-political conundrums, anthropological taboos, invidious avarice, corruption and the abasement of ideals. Falsehood classes with truth and leaves the collateral damage of injustice and impoverishment. Colonialism is eviscerated though the prism of humanistic sensitivity, deception and the vitiation of moral standards illumed by a resolute pen.

The novel asks its reader many questions, all ensconced within the diaphanous web of an innocuous journal. Elizabeth’s anodyne public letters convey nothing of her true existence. Only within her journal do we encounter the defrocked truths of her life and that of the nation stirring into life around her. Duplicity haunts the novel, a miasma permeating its events with ineluctable resonance. Elizabeth says of her own redacted public letters:

‘It gave me a mocking, angry satisfaction to fool everyone so well… To be clever in quite such a way is to live within a great solitude’.

The power of the novel is paradoxically derived from its simplicity. Ostensibly, the clandestine musings of a gentle soul in a harsh land, Elizabeth’s account of her married life in embryonic Australia is an intricately sculpted allegory, elucidating both the particular and the historical. For such a vehicle to be effective, only convincing character rendition will do. Grenville’s authorial talents support the majority of her creative objectives, however character portrayal is for me her chief artistic asset.

The depiction of John Macarthur is a masterclass in psychological character portrayal. We see him as described by his wife and by dint of her account of his actions. Elizabeth tells us early in the novel that...

‘My husband was rash, impulsive, changeable, self-deceiving, cold, unreliable, self-regarding…My husband was someone whose judgement was dangerously unbalanced. There was a wound so deep in his sense of himself that all his cleverness, all his understanding of human nature, could be swept aside in some blind of lunatic compulsion’.

Indeed, her understanding of him forms our own:

‘It was not sheep or corn that interested him, and certainly not his onerous military obligations. What was uppermost in his mind was trade…It was that his nature made him crave to be at the heart of a complicated tangle of other men’s greed, fear, sloth, malice, directing them by plotting, scheming, luring, threatening, coaxing. More that the money, more even than the power to shape events, was the pleasure he took in his own ingenious schemes’.


Also by Paul Spalding-Mulcock...
'We Choose How We Treat Each Other' : People Like Us – Louise Fein'The Uncanny Power Of Repression': The Haunting Of Alma Fielding By Kate SummerscaleAuthenticity Is Its Own Reward: Interview With Kirsten Hesketh, Author Of Another Us'Heaven Knew The Boundaries Were Blurred': Kirsten Hesketh - Another UsInterview With Victoria Dowd: Debut Novelist And Author Of The Smart Woman's Guide To Murder
Grenville undermines Macarthur as surely as a sapper at work on a battlefield. Macarthur’s greed and duplicity stand as the abiding symbol of colonialism in all its exposed ignominy:

‘He was remade too, into a more glorious version of himself, so the two John Macarthurs ran side by side like a pair of well-matched carriage horses: similar but not the same, close but never quite touching.’

He reminds me of Maupassant’s Georges Du Roy, charming, but monstrously self-serving. The rendering of Elizabeth herself is no less convincing. We learn from our protagonist that she was, ‘A wilful girl’, and that being such, ‘was something that made you unattractive, unpleasant, unreliable’. We see her burgeon by dint of being in a strange land and conjoined with the introverted, but sensitive Mr Dawes:

‘In the company of Mr Dawes I had found a woman I liked, even admired. Had learned things about myself that I had never guessed at. Our friendship had taught me that life was not extinguished in me. Under the bland courtesies of Mrs John Macarthur lived another woman entirely, one I was happy to meet’.

Her honest facing up to the injustices perpetrated by her husband and his ilk during her lifetime are the views of the author though ascribed to her heroine:

‘I have to face the fact that I am a thief. More of a thief than Mrs Brown, who was a thief only once. I have been a thief for everyone of those forty years’. Ultimately, Elizabeth comes to regard colonial crimes as being, ‘Not just the taking-off from their lands and the damage to their old ways. Not just the cruelties inflicted. Not just the deaths. Behind all this is another, fundamental violence: the replacement of the true history by a false one’.

Perhaps Grenville’s attempt to wrestle with her own questions does at times lead her to bias or indeed the peddling of a subjective narrative under the banner of truth. However, we are reading historical fiction and the author has been upfront about that salient fact by the time we reach the book’s denouement. In her author’s note, Grenville like her protagonist, comes clean:

‘This book isn’t history. At the same time it’s not pure invention. Those old documents were my inspiration and my guide. I arrived at this story by thinking about them in the way “Elizabeth Macarthur recommends”’.

So, a beautifully crafted novel of force, insight and disruptive intelligence. Like everything else in life, to be encountered with an open mind and to recall Elizabeth’s sage advice: ‘Do not believe too quickly’!


A Room Made of Leaves is published by Canongate Books.