Poem Of The Week: 'Inter-city' By Liz Lochhead 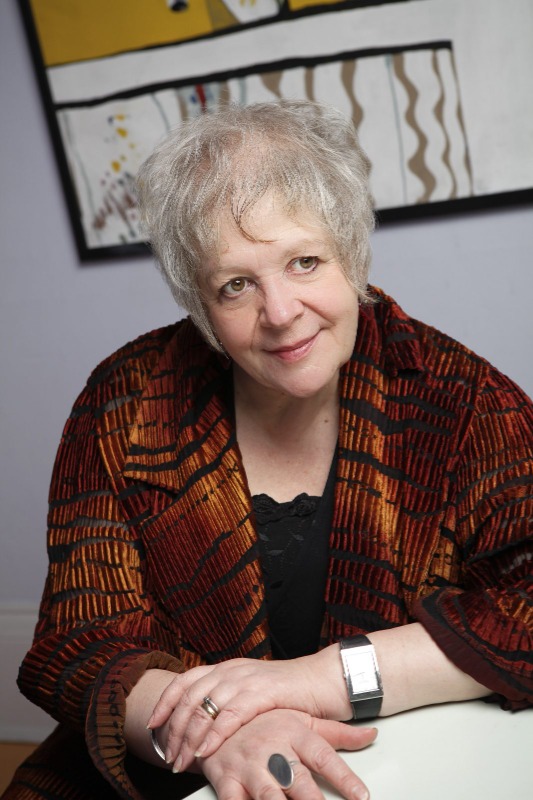 Hammered like a bolt
diagonally through Scotland (my
small dark country) this
train’s a
swaying caveful of half-
seas over oil-men (fuck
this fuck that fuck
everything) bound for Aberdeen and
North Sea Crude.
Empty beercans of
spun aluminium roll like ballbearings
underfoot and
sloshing amber’s a
storm in a whisky glass or two.
Outside’s all
black absolutely
but for fizzing starbursts
of weirdblue or orange streetlights
and lit-up grids of windows.
Only bits of my own blurred
back-to-front face and
my mind elsewhere.
The artsyfartsy magazine I’m
not even pretending to read
wide open
at a photograph called Portrait of Absence.

Sometimes it doesn’t matter that the furniture of a poem, the detail, is locked in the context of a time as surely as a butterfly pinioned in a glass case; what is significant is the moment’s gilding by the presence of that ephemera. Scots poet, and former Makar, Liz Lochhead’s train journey ‘diagonally’ across Scotland - perhaps between Glasgow and Aberdeen - cuts a swathe through complexity with characteristic directness. The hammering of a bolt through the darkness is a convincing metaphor for a bone-shaking ride into uncertainty whose consistency is later reinforced by the rolling ‘ballbearings’ of beercans, as though the train was a gearbox being tested, by speed, to destruction.


Also by Steve Whitaker...
Poem Of The Week: From Under Milk Wood By Dylan Thomas (1914-1953)Passport Not Needed: Nothing But Words By Jean StevensPoem Of The Week: 'First Foetal Movements Of My Daughter' By Penelope ShuttleLycanthropes & Astronauts: Wolf Planet By Oz HardwickPoem Of The Week: 'The Behaviour Of Dogs' By Craig Raine
The velocitous journey is inexorable, as beyond the narrator’s control as the languid mood of her sparse lines suggest. She too is pinioned, inert except for moribund introspection, as if similarly infected by the numbing narcosis of beer and whisky. All she can do is observe the ‘fuck / this fuck that’ nihilism of the returning oil-men in the figurative darkness of cultural entropy. The ‘fizzing starbursts’ of passing illumination – the lit windows and streetlights - gives only residual relief against a backdrop of uniform black.

Her grip on this space between two worlds – ‘Inter-City’ – is loosened further by the reversal of her facial features in the glass, the mirror to a wider sense of ennui. The unread magazine of the final lines is a corroboration of mood: the photograph’s title yields an exquisitely ironic synopsis of the poem’s wider definition of absence, perhaps even of loss, on this odyssey of physical and mental separation.