Poem Of The Week: 'Winging It' By Kerry McMullen 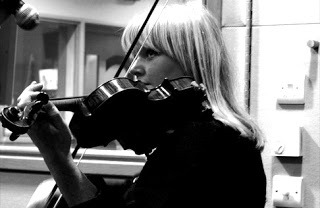 Kerry McMullen
The relentless irritant of a mewling child is the starting point for Skipton poet and musician, Kerry McMullen’s, escape into imaginative abandonment. The ‘Winging it’ of her fine poem’s title describes a means of coping, a kind of default auto-pilot mechanism which is a not infrequent recourse for mothers whose friable sense of self is exposed to an hourly erosion of will.

'Pick may yup!'
I gaze down at her, she glares up at me
with all the fury of Lady Macbeth.

Just as in the darkest of rooms
Under an infared glow I watched the fruitbats dive and
Feck their fangs into sumptuous fruit.

Upside down they feasted, tucking their origami wings in while tucking in.

'MALKIE! MALKIE!'
Swooping down she snatches me from my daze, latches onto me under my gaze,
As I become her fruit and her cave.

Also by Steve Whitaker...
Poem Of The Week: From Under Milk Wood By Dylan Thomas (1914-1953)Passport Not Needed: Nothing But Words By Jean StevensPoem Of The Week: 'First Foetal Movements Of My Daughter' By Penelope ShuttleLycanthropes & Astronauts: Wolf Planet By Oz HardwickPoem Of The Week: 'The Behaviour Of Dogs' By Craig Raine
But the title also echoes the wild ‘winging’ of Siegfried Sassoon’s unfettered joy, in his poem of existential postwar relief, ‘Everyone Sang’. The birds in Ms. McMullen’s poem are seductive ‘changelings’ too – products of a fevered imagination whose only conduit to retreat is through a ‘downward spiral’ of wuthering contemplation. The poet’s rich alliterative and repetitional flurry drives home a sense of recalibrated purpose, if only temporarily.

There is a playful gothic twist to Kerry McMullen’s imagery: the slow, ominous flocking of the other-worldly birds, the suggestion of gathering darkness, and the archaic literary ornamentation of ‘wingéd’. The vampiric verisimilitude of the gorging bats in a recalled observation in the penultimate stanzas qualifies the propensity of her earlier dreaming, and prepares the ground for her return to an abstracted form of reality, whose potential for metaphorical innovation is too much to resist. In the end, the mother figure is joyfully ‘imprisoned’ in a cage of her own devising, a captive bearer of love and succour. We trust that she sings in her ‘chains like the sea’.